How can land protection and restoration help protect communities from wildfire? 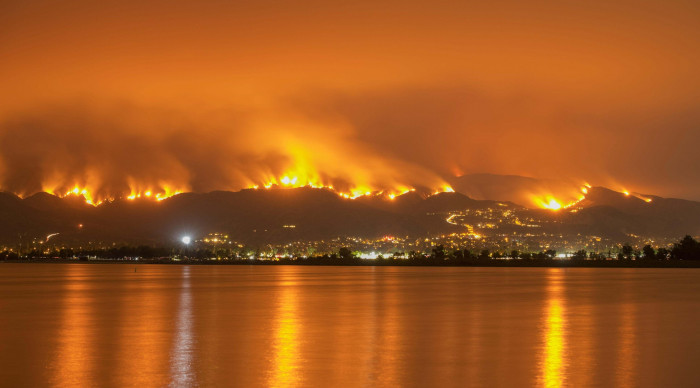 With rising temperatures and changing rainfall patterns in California, climate change is already causing more frequent and catastrophic wildfires. The drier conditions create an ideal environment for the ignition of wildfires, and a longer dry season means more opportunities for fires to occur, to last longer, and be more destructive.

We’re already experiencing the disastrous wildfires caused by climate change that scientists had predicted would not begin until the middle of the century. In 2020, wildfires burned the largest area of land on record in California – over 4 million acres from 9,000 individual fires – doubling the previous record of 1.8 million acres set in 2018.

Building residential areas adjacent to, and in, fire-prone wildlands (also known as the wildland-urban interface or WUI) creates an interaction that can be disastrous to communities—and the impacts of a changing climate only serve to increase the frequency, intensity, and extent of the damage.

Over the next 50 years, as development in California sprawls further into high fire risk zones, and as existing at-risk communities increase in population density, more people will be exposed to wildfires with potentially disastrous consequences.

The Nature Conservancy and our partners know that restoring natural landscapes can mitigate the impacts of climate change.

Beyond wildfires, other natural disasters have well-established nature-based resilience strategies, with proven resilience and long-term financial benefits. With sea level rise, wetlands and other coastal habitats reduce the impact of storm surges and can protect communities from flooding. With inland flooding, the restoration of natural floodplains can protect communities from riverine flooding.

Visit this interactive StoryMap, Building Wildfire Resiliency in California, to learn more about this approach and how communities and nature benefit.

In 2018, the small town of Paradise, California, made international news when a wildfire killed eighty-six people, burned 95% of the town’s structures to the ground, and caused billions of dollars in damage. The tragedy was of extraordinary proportions.

To learn from Paradise and help reduce the risk of it happening again, TNC launched two partnerships to develop and test new approaches to (re)development. Combining internal and external expertise in fire and ecological science, conservation planning, and economic modeling, TNC produced methodologies in fire-resilient community design and insurance modeling. Those partnerships and their methodologies are highlighted below. 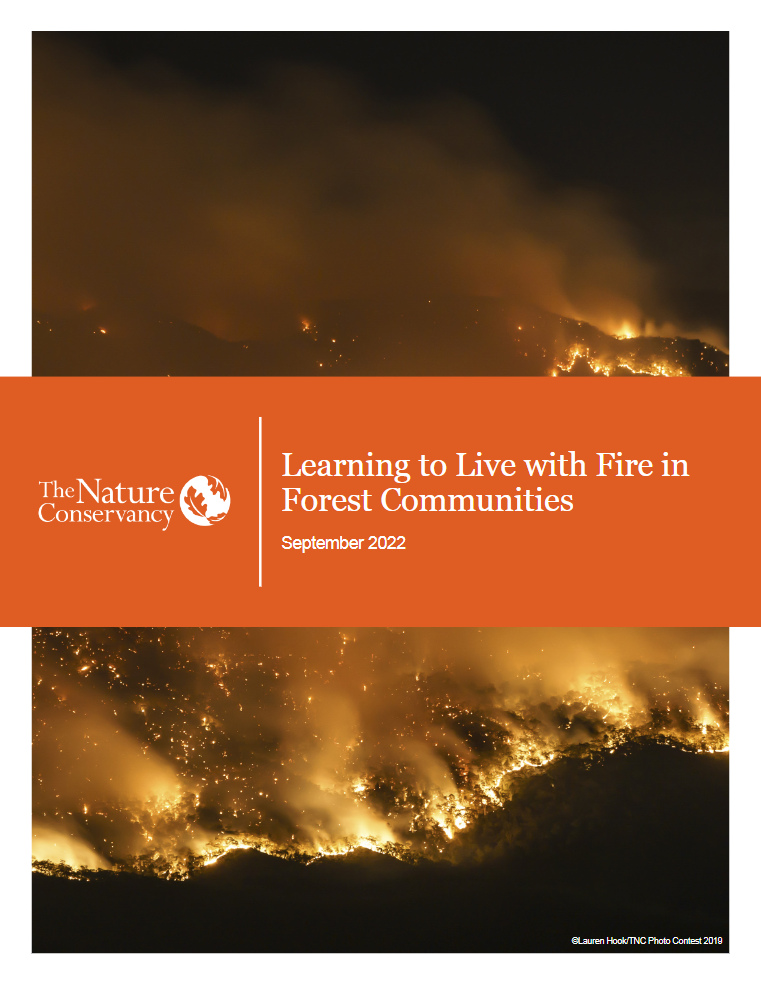 A 2022 report, Learning to Live with Fire in Forest Communities, highlights the science and benefits of fire-resilient community design.

First, TNC partnered with key stakeholders in the Paradise community to demonstrate how redirecting development and urban growth in the Wildland-Urban Interface (WUI), in tandem with nature-based fire buffers can protect nature, people, and communities most vulnerable to these natural disasters.

The project identified high priority parcels that, if managed appropriately, could reduce the risk of fire ignition within the town by up to 64%. These findings led to development of a series of Fire-Resilient Community Design scenarios that may be applicable to high fire risk communities across the Western U.S. 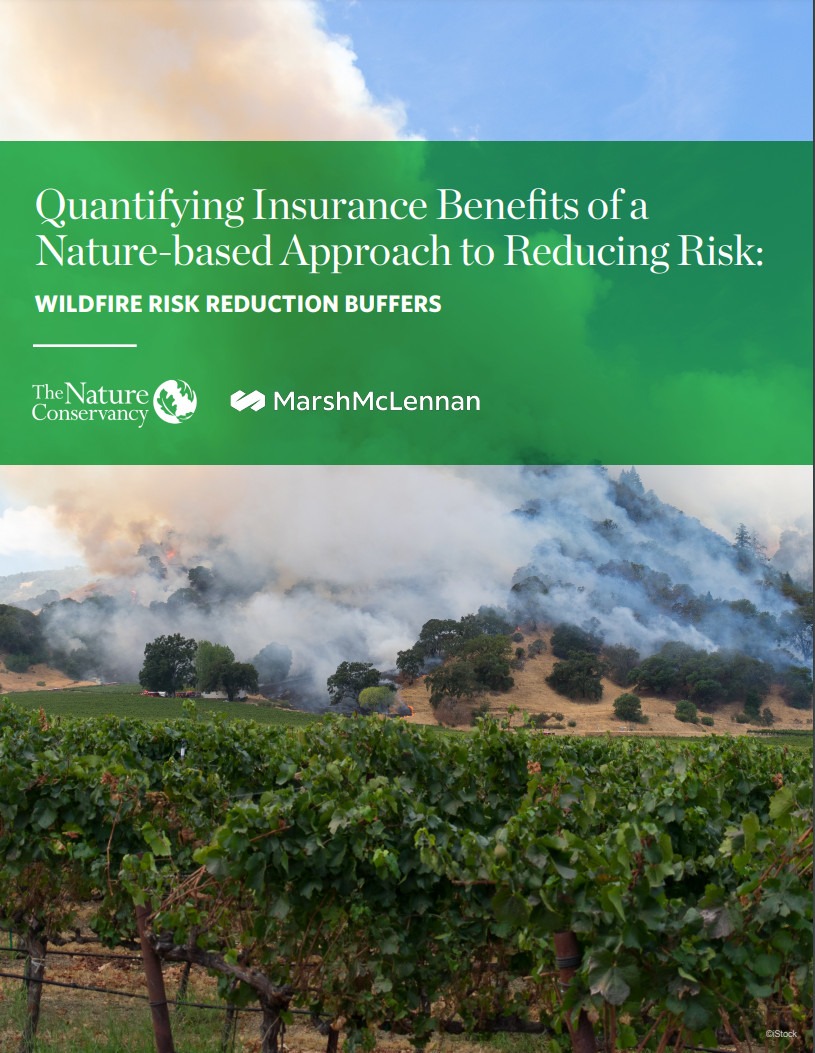 When the Camp Fire destroyed Paradise it resulted in $12.5 billion of insured property loss, and $16.5 billion in total property losses, making it the costliest single natural disaster in the world that year.
Building off the buffer work completed in the partnership above, The Nature Conservancy partnered with Marsh McLennan to use catastrophe models to translate the modeled ignition risk reduction into loss reduction terms used by insurers. Quantifying the benefits of a disaster risk reduction intervention (use of buffers) in terms that can be understood and accepted by the insurance community can provide benefits to the residents in the form of lower insurance premiums or even availability of insurance altogether.
The outlined methodology could increase community safety, decrease costs associated with fire suppression and insured property losses, and improve the ecological health of surrounding wildlands.
Read more in Quantifying Insurance Benefits of a Nature-based Approach to Reducing Risk: Wildfire Risk Reduction Buffers.

With increase in devasting storms and wildfires due to climate change, we need solutions to help mitigate the impact. Traditionally, “gray” or “hard” infrastructure solutions that rely on engineering projects using concrete and steel have dominated efforts to manage risk and mitigate hazard impacts…

This paper presents results from Planting Stormwater Solutions, part of TNC’s Urban Conservation work in Los Angeles. The authors develop a methodology to prioritize siting of vegetated nature-based solutions for stormwater capture so that these projects maximize benefits to biological diversity, social and public…

Forests of the Sierra Nevada and across the western U.S. are under unprecedented threat from catastrophic wildfire, insect outbreaks, and drought. In this briefing paper, which was developed as a collaboration between Bain and Company and The Nature Conservancy, we assess the challenges and…

Nature-Based Climate Solutions: A Roadmap to Accelerate Action in California

Wildfires and Forest Resilience: the case for ecological forestry in the Sierra Nevada

Forests of the Sierra Nevada and across the western U.S. are experiencing an unprecedented increase in the size and severity of wildfire along with widespread tree mortality due to drought and insect outbreaks. These developments not only threaten lives and communities but also seriously compromise…