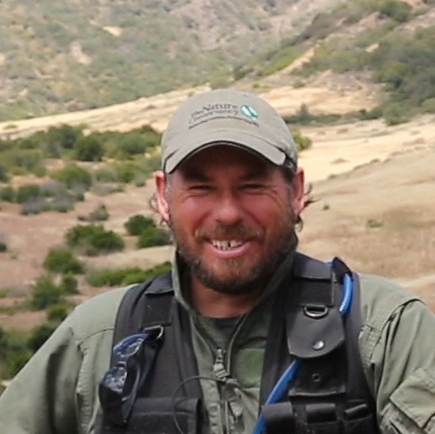 John works on the California Islands for The Nature Conservancy’s California Chapter. He has worked on the islands for over 15 years, and has 20 years of experience in land management that includes: threat and recovery prioritization and planning, habitat restoration, invasive species eradication and biosecurity, and geographic information science. He leads several initiatives across the California Islands Archipelago in close partnership with island owner agencies, NGOs, research institutions, and for-profit companies to develop and implement cost-effective solutions to global conservation challenges facing islands and mainland counterparts including invasive species, plant extinction, and overgrazing.

John was born and raised in rural California and has a M.S. in agriculture from California Polytechnic San Luis Obispo with a specialization in Weed Science. While there, his research focused on prioritizing invasive plant species for eradication at the landscape-level. He holds a B.S. in physical geography with an emphasis in ecology from the University of California, Santa Barbara. John’s goal is to develop and refine cost-effective conservation strategies and methodologies to better manage ecosystems and stop extinction.

What John is working on now:

With field work completed in 2015, I am now in the throes of completing a vegetation map for Santa Cruz Island, which is set to be completed by early 2018. After 14 new populations of the Federally endangered island barberry (Berberis pinnata subsp. insularis) were recently found on Santa Cruz Island, the last remaining plants in the wild,  I am desperately trying not to scratch my case of poison oak which I contracted while collecting samples for this species for population genetic analysis, which will be used to guide extinction prevention outplantings. I am also working with island owners and mainland partners to hold the 4th annual binational Islands of the Californias Botanical Collaborative Workshop that brings approximately 30 botanists and land managers together to address share botanical conservation priorities. This year we are focusing on the relationship between habitat restoration and sea birds. Next year is The Nature Conservancy’s 40 year anniversary working on Santa Cruz Island, and I am relocating historic photographs that will illustrate the change during the past 4 decades. Lastly on my to-do list is to finalize two manuscripts in production, 1) a decision tree to guide the reintroduction of plants presumed to be extirpated, and 2) a case study of the lessons learned from the invasive species eradications that have taken place on Santa Cruz Island.

This 5-year action plan describes the vision for invasive plant species mapping, monitoring and treatment at the Jack and Laura Dangermond Preserve in Sourthern California. The plan is adaptive and will updated as new species, management approaches (including new and emerging technologies), and monitoring results…

Informing Our Successors: What Botanical Information for Santa Cruz Island will Researchers and Conservation Managers in the Century Ahead Need the Most?

A bioblitz is a collaborative, rapid field assessment that takes place in a given location over a short period of time. This paper discusses how bioblitz events involving experts are being used to meet the needs of conservation. The authors discuss the best practices for…

The islands off the Pacific coast of California and Baja California, from the Farallones in the north to Isla Natividad in the south, are within the California Floristic Province. Their shared flora is distinctive and rich in endemic genera, species, subspecies, and varieties not found…

Strategies for biosecurity on a nearshore island in California

Biosecurity is the prevention of damaging non-native species’ arrival and establishment to new areas, for the protection of native plants and animals. This paper discusses the first iterations of a biosecurity program on Santa Cruz Island, California, wherein wildlife cameras were used to search for…